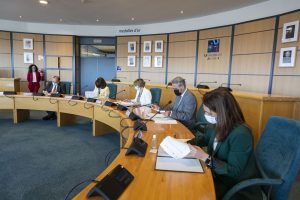 Today is an important milestone that must be remembered as the beginning of a Valencian interuniversity collaboration.

The libraries of the Valencian public universities have formed a consortium to share resources, participate in national and international projects and continuously acquire documentary resources on paper and electronic.

Over the last few years, some cooperative agreements have been established sporadically, and one of the first was the one signed in 2014, a specific convention of collaboration of the Valencian Interuniversity Loan within the Habitat Campus 5U framework that allows the professor and personal researcher and the staff the loan of bibliographic material in any of the participating libraries.

In 2019, the joint provision of the implementation, support and maintenance of a library management services platform and discovery tool for librarians was put out. The result has been that the five libraries have, from now on, a common library management computer program, called Alma, and the discovery tool, Primo. It has been an important step that we have taken since we started from different realities and situations.

In addition to launching the computer program, we drafted a proposal for the Statutes and the Agreement for the constitution of the BUVAL Consortium, the Protocol signed by the public universities of the Valencian Community for the constitution of the Consortium of University Libraries (BUVAL). These two documents, Agreement and Statutes, have passed and have been approved by the Governing Councils and Social Councils of the five universities.

The implementation of BUVAL means establishing links, cooperating, sharing … and as indicated in the preamble to the BUVAL Statutes: “… participating libraries, regardless of their nature, structure or size, expand their field of action, improve their visibility and guarantee future development … ”with a clear objective: to provide excellent support  to quality in research and teaching at the five universities.

Any cookies that may not be particularly necessary for the website to function and is used specifically to collect user personal data via analytics, ads, other embedded contents are termed as non-necessary cookies. It is mandatory to procure user consent prior to running these cookies on your website.